Claims he does play games... Skylanders 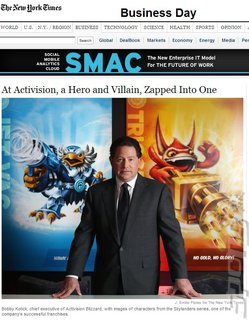 Activision CEO and actor, Robert (Soften his profile) 'Bobby' Kotick, has divorced recently so finds Google image searches of him with horns on distracting, "Think about what it?s like for my dating life when the first picture that comes up is me as the Devil" he asks in a recent interview.

This is not the only thing that perturbs Mr Kotick. His critics bug him too:

?When you dig down and look at the people who are vocal in their criticism of me," he tells The New York Times, "it?s a small number."

Then, in order to prove a point about being a gamer, "He holds out his thumb and says he had calluses from playing too much Defender, a 1980s arcade game set on a fictional planet that requires users to protect astronauts by shooting aliens. Today, he says he mostly plays Activision?s newest series, Skylanders, with his 11-year-old daughter."

And this means, ?People criticize me for not being passionate about the products, but I am."