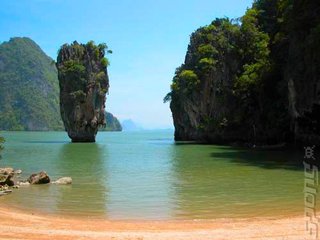 Phucket man.
The discarded wrapping from Black Ops 2 is not even cold and already we're talking about Call of Duty 2013 and the presumption that it's going not only to be called that but also that it's going to continue as a Modern Warfare.

So comes the news via a script containing words to be spoken in the news game by a character codenamed Ben Burke. They read, in part as follows:

"Reminds you of Phuket, doesn?t it? Only this time the dust gives you cancer? OK, park yourself and get ready. When this thing kicks off, put a hole in anything that moves."

Siliconera, from whence the quotes come also says that, the main character in the new title is "a battle hardened veteran in his mid-thirties with a nihilistic point of view."

There are more quotes too:

"This is Sentinel Zero One, successful crypto change on C2 net break, requesting immediate update of blue force picture and status of artillery, over. I have you broken and unreadable, I say again, requesting updates to friendly positions and status of arty support. Do you read, over?"

"We?ve got KVA on the move! They?re going to strongpoint the main gate, ETA two mikes! We?re providing support for our heavy rollers! Ready up and let?s move!"

"Goliath, this is Sentinel Zero One! We have enemy armor at the gate, hundred meters north of our position! Requesting close-air grid mark three-one-six!"

Sure, it sounds well warlike...