Need for Speed: Most Wanted makes EA hard though... 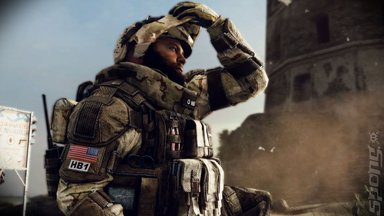 Where is that mock reviewer when you need her??
"Our Q3 appears soft due mostly to Medal of Honor" so says EA's CEO John Riccitiello. What he means is that Medal of Honor Warfighter hasn't got many fans right now and won't be selling so well. Which, based on mock reviews, is not what the company was expecting.

He followed up his statement at a recent investor call with a slightly more upbeat hope for the Criterion-developed Need for Speed: Most Wanted though, saying:

"...the highly anticipated Need for Speed Most Wanted launched today in North America. While we are very pleased with the demand indicators on Need for Speed, the Metal of Honor launch is coming in below our expectations."

However, his constant refrain is of MOH with statements such as, "We are managing the ups and downs. Our Q1 and Q2 were better than expected. Our Q3 appears soft due mostly to Medal of Honor. We're expecting a strong finish in Q4, driven by a powerful slate of titles. Taken together, we are updating our fiscal '13 non-GAAP EPS guidance to a range of $1 to $1.15, down $0.05 from our original guidance, which reflects the weakness in Q3 associated with Medal of Honor. At the midpoint, our guidance is to deliver over 25% non-GAAP EPS growth and to beat the current street EPS estimate for our fiscal year."

If all the figures and financial terms mean little to you, you'll still appreciate that the huge investment made by the company into the FPS has taken the shine off its main task of 'increasing shareholder value', and this has apparently come down to bad reviews.

The effect of poor reception for MOH crops up later with, "Chief Financial Officer and Executive Vice President Blake J. Jorgensen stating that poorer than expected earnings per share are due to "weaker-than-expected performance from Medal of Honor Warfighter and our decision to cancel our NBA title."

Frank D. Gibeau - President of The EA Labels - takes up the tone, stating: "Medal of Honor Warfighter shipped last week to a critical reception that fell below our expectations. While we're disappointed with the critical response, we believe this is a good game with a receptive audience. The game finished the weekend in the #1 position in the U.K. We will continue to support the game through the holidays with sales execution and marketing. This includes a compelling content download tied to the December release of Sony Pictures' film, Zero Dark Thirty."

He then describes something that might come as a small surprise to gamers who have not been keeping up with MountainDewGate:

Gibeau explains to analyst Edward S. Williams - BMO Capital Markets U.S. who had asked, "Just a quick question, if I could, on Medal of Honor and on NBA Live. What, in your opinion, really is kind of what drove the relative performance there? And how is it that you think you can kind of prevent that from occurring again?"

Gibeau says, "We take product quality very seriously at Electronic Arts, and it's kind of lifeblood of what we do. And when we look at launches like Medal of Honor and NBA, we're not happy with the results there in terms of how they've been received, in the case of Medal of Honor, by the critics and reviewers...

"... On Medal of Honor, we're disappointed with the critical reception. Our internal testing and mock reviews indicated that the game is better than the actual score that we have right now, and we believe that it is."

Who, you wonder, wrote the "Mock Reviews"? You have to figure that they would not have been internally produced if they were going to provide any real value in terms of judging quality. So, who wrote the Mock Reviews for EA? We are looking into it.