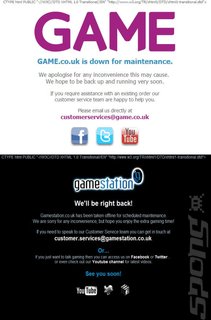 Even though we all knew that Gamestation - the UK games retailer - was getting rebranded to death by its once troubled parent company GAME Group, the following news is still a tiny bit tear jerky if you remember the days of knowledgeable and enthusiastic staff who actually liked video games.

It's being reported that following that rebrand the Gamestation website will die on October 29th.

Frankly, trying to get Gamestation online to load right now is impossible, so we reckon the report must be "will officially close".