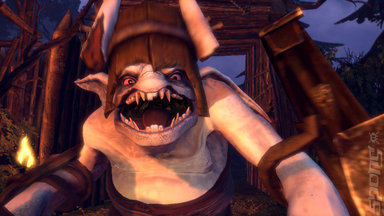 "If you didn't want to be uprooted you should have got a job as an accountant!" HR.
Microsoft's Lionhead Studios (once famously under the famous guidance of the famous Peter Molynexu before he famously... left) is laying off staff following the completion of the Kinetic-pushing Fable The Journey.

Before the detail, let us remember this headline from July 2012 - before the game's release - Lionhead: Backlash Against Fable The Journey "Destroyed" Us. This featured Lionhead creative director Gary Carr saying that criticisms were tough but, "The team rallied really quickly, it made us double-down on the project and worked really hard to make sure it was the best thing they could make..." Well, that team now faces demolition.

Microsoft has released a statement - reported by Develop - that says, "Following the completion of Fable: The Journey, Lionhead Studios has begun work on its next projects,? read a statement from Microsoft.

?As is common in the games industry, a smaller headcount is needed as projects kick-off and ramp up as full-production gets underway. At this time a small number of positions have been identified as at risk of redundancy and the affected employees were notified today.

?We are working very closely with those people during this difficult time, to help them explore alternative opportunities within Microsoft - including new roles at Microsoft Studios which is growing in the UK and actively hiring across all locations, including Lionhead, Rare, Soho Productions and our recently announced new studio in London.?

Go... team. Makes you wonder, as it has with some staff who wish to remain anonymous, "Why in this day and f***ing age why companies as apparently competent as Microfuc*ingsoft take on permanent staff that they know will be offed after project close?"

Our review of Fable The Journey is here.
Companies: Lionhead Microsoft
Games: Fable: The Journey

DrkStr 16 Oct 2012 18:16
1/1
If they are actively hiring in Lionhead why are they sacking people from Lionhead?
Posting of new comments is now locked for this page.