But calm down, it wasn't the verbal one 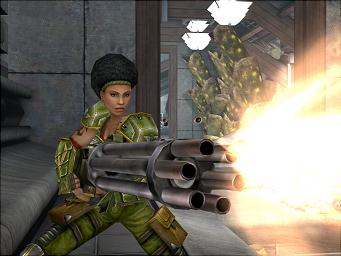 A video game Bot developed computer scientists at The University of Texas at Austin to play a part in Unreal Tournament 2004 has won a competition sponsored by 2K Games. The prize is called the BotPrize. All over the media it's also being called 'The Turing Test'.

Risto Miikkulainen, professor of computer science in the College of Natural Sciences. Miikkulainen created the bot, called the UT^2 game bot, with doctoral students Jacob Schrum and Igor Karpov, llays out what actually happened, "The idea is to evaluate how we can make game bots, which are non-player characters (NPCs) controlled by AI algorithms, appear as human as possible."

According to phys.or the 2K prize differed in that it was less about talking and more about playing UT4.

"The (competing) bots face off in a tournament against one another and about an equal number of humans, with each player trying to score points by eliminating its opponents. Each player also has a "judging gun" in addition to its usual complement of weapons. That gun is used to tag opponents as human or bot."

But here comes the kicker: