No release date because Rockstar hasn't given it one 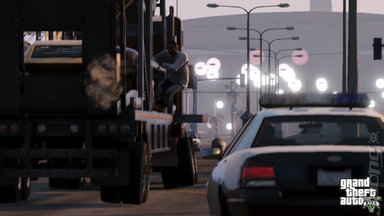 Take 2 Interactive released its Q1 2013 Results last night and off the back of them it has an "Earnings Call" with analysts. During that its execs talked GTA V.

"What's going on with that game?" was basically the line taken by the analysts. "Where is the damned thing?" Chief Operating Officer, Karl Slatoff , responded:

More flesh was added to those bones by your friend and ours Mr Strauss H. Zelnick, Take 2's Chairman, Chief Executive Officer who responded to Michael Hickey an analyst from National Alliance Capital Markets, Research Division, who asked: "we've heard nothing -- next to nothing on GTA V over the last couple of months. We've seen a couple of screenshots. The game is believed by the Street to be implied by your guidance for this fiscal year, but what believability do we have at this point that this game is actually going to come out this year? And especially when you say the bar is higher, reflecting on the performance of Max, how do your teams bounce, getting that quality bar higher versus the perceived need to get the game out for the next game console?"

This didn't stop Hickey though, he came back with, "Okay, fair enough. And then I'm guessing that you're consistently -- can you just walk us through the sort of communication you have with the Rockstar studio in terms of the development of GTA V? I mean, are you getting kind of consistent updates in terms of that game's pacing of development? Has anything changed in the last couple of months?"

Strauss returned fire thus, "Mike, we wouldn't talk publicly about the way that we communicate with our teams internally. We're blessed to be in business with the Rockstar folks, and everyone knows that I feel that way."

So, no matter what other sites might want you to believe, there is NO release date for GTA V.