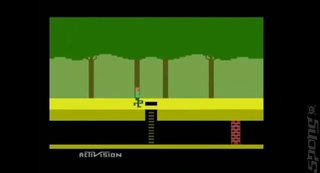 When you think about it - or look it up - a game including the word 'Pitfall' would appear to have been rebooted loads of times. But this is not stopping ex-Rockstar man Gordon Hall and his Leeds team from rebooting the gosh-darn thing again... this time for mobile.

You can see the video of the mobile version below. Here's what Activision says about the new team, called in a Yorkshire way "The Blast Furnace", and don't forget the ?:

"Pitfall! has been in development at Activision's recently revealed Leeds, UK-based studio The Blast Furnace?. This newly formed studio team is led by veteran developer and former head of Rockstar London, Mark Washbrook, and Activision is now announcing the addition of Rockstar Leeds legend Gordon Hall, who will partner with Washbrook to oversee The Blast Furnace. Hall will also join Activision Mobile's leadership team as Chief Creative Officer, and will focus on bringing AAA interactive experiences to the mobile space.

We understand that The Blast Furnace (?) might have the rights to all of Activision's back-catalogue... going forward. And now, the trailer.