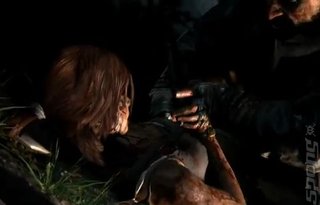 All Images (2) »
Crystal Dynamics and Square Enix are back-pedalling or clarifying a statement from executive producer Ron Rosenberg regarding the new Tomb Raider title and a comment run regarding an attempted rape attempt on Lara Croft.

First up, here is what Kotaku said that Mr Rosenberg said:

"She'll get taken prisoner by island scavengers. And then, Rosenberg says, those scavengers will try to rape her."

Now let's watch the video that this situation is supposed to occur in.

Now let's see the full transcript of that section of the interview published by Kotaku:

"RON: "And then what happens is her best friend gets kidnapped, she gets taken prisoner by scavengers on the island. They try to rape her, and-"

"KOTAKU: "They try to rape her?

"RON: "She's literally turned into a cornered animal. And that's a huge step in her evolution: she's either forced to fight back or die and that's what we're showing today."

"We had a great E3 with Tomb Raider and received a fantastic public and press response, with the game picking up numerous game of the show awards based on the new direction taken with the franchise. Unfortunately we were not clear in a recent E3 press interview and things have been misunderstood. Before this gets out of hand, let me explain.

"In making this Tomb Raider origins story our aim was to take Lara Croft on an exploration of what makes her the character she embodies in late Tomb Raider games. One of the character defining moments for Lara in the game, which has incorrectly been referred to as an ?attempted rape? scene is the content we showed at this year?s E3 and which over a million people have now seen in our recent trailer entitled ?Crossroads?.

"This is where Lara is forced to kill another human for the first time. In this particular section, while there is a threatening undertone in the sequence and surrounding drama, it never goes any further than the scenes that we have already shown publicly. Sexual assault of any kind of categorically not a theme that we cover in this game."

Let's have a look at that video again:

So, why was Lara forced to kill that guy? Yes, he was attempting to rape her. That's what "They try and rape her" means.
Companies: Crystal Dynamics Square Enix