New Lara Croft: "Island Scavengers... Will Try To Rape Her"

Female game character gets into trouble. That trouble must be 'rapey'. Faces hit palms 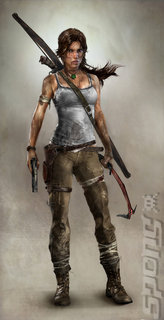 A "non-sexualised" Lara.
The new "not sexualised" Lara Croft in the forthcoming Tomb Raider re-boot will be threatened with rape by 'Island scavengers' according to executive producer Ron Rosenberg.

This means that you will want to "protect her". Yes, that's right. The re-imagining of one of video gamings strongest female characters will see her in a rape scenario where big strong gamers will want to protect her.

Why would you want to protect poor Lara? Is it because otherwise she is a taaaaaad threatening? Says Mr Rosenberg, "She's definitely the hero but you're kind of like her helper. When you see her have to face these challenges, you start to root for her in a way that you might not root for a male character."

So, what will we need to protect her from? Tigers? Falls from great heights? 21st Century ideas on video game characters? Beaten wife syndrome wherein the women's confidence is built up before the male causes a situation to occur in which the female realises how stupid and weak she is, has her confidence broken down and 'forces her husband to give her a smack?" Surely not.

Says Mr Rosenberg, "She literally goes from zero to hero... we're sort of building her up and just when she gets confident, we break her down again."

According to Kotaku, "She'll get taken prisoner by island scavengers. And then, Rosenberg says, those scavengers will try to rape her."

"She is literally turned into a cornered animal. It's a huge step in her evolution: she's forced to either fight back or die."

We await the first game of the new age with a male rape scenario with slack jaws. So, why is Crystal Dynamics doing this with the reboot? "We're not trying to be over the top, shock people for shock's sake. We're trying to tell a great origin story."

Yes, this passes for original.

DrkStr 13 Jun 2012 12:19
1/2
Twelve days ago it was "the heroine kills a man attempting to take advantage of her" in a game "looking absolutely phenomenal".

Now it's "one of video gamings strongest female characters ... in a rape scenario where big strong gamers will want to protect her".

Shane K. Firth 13 Jun 2012 13:59
2/2
Why do I get the feeling that the original interview was either poorly given or poorly interpreted by the chap over at Kotaku?

Blatantly people are going to concentrate on the idea of rape, because that is the big no-no of our time when it comes to characters in fiction, 'I Spit On Your Grave' featured a helpless woman who was brutally raped, but then took brutal vengeance out on the men who victimised her. The film was banned outright, it was exploitative and crude and honestly deserved to be banned, with Tomb Raider people are suddenly taking a similar stance without first playing the game.

For a moment let us step back and look at Lara's situation, she is ship wrecked on a island that is being used by some very bad men who prey on those who are wrecked, so far their are no signs of female scavengers, so for now we will assume that it is a group entirely made of men who are very, very bad. Suddenly they find themselves an attractive, young woman who is in shock over various things that have come to pass and what? They aren't going to take advantage? Of course they are, that is what bad people do, but, and it is a big but... She does not let it happen, she fights and in the process she gets the hell beaten out of her, but she goes on to learn and to hunt down these bad, bad men.

Personally I'm still looking forward to this game, the game itself speak volumes for itself, even if the people being interviewed cannot do it justice and manage to throw everyone and their auntie into a tizzy.

For someone to become a merciless killer like the Lara we already know a lot of bad things have to happen to her first, no one is born that way and it isn't something you train for. For someone to become that way they first have to be stripped down to the animal beneath and from the primal place no one returns the same... not even wise cracking gun toting Lara Croft.