Nintendo has released some tech specs 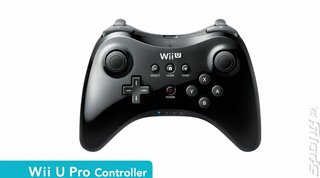 All Images (11) »
One thing we all wanted to know about the all singing-all dancing Wii U secondary screen and controller is how long does the damn thing work between charges. Well, now Nintendo has stated the number:

According to Ninty - the most game of all the platform holders at this year's E3 drone fest by the way - the "Wii U GamePad" as we must get used to calling it gives between three and five hours between charges. Now, whether that's 100% charge to 0% charge or between recommended charges we still finding out.

"Packed inside are an accelerometer, gyroscope and geomagnetic sensor, as well as the much-vaunted Near-Field Communication (NFC) chip that you?d find in an Oyster Card. Rumble is also supported."

The main Specs are:

The new controller incorporates a 6.2-inch, 16:9 touch screen and traditional button controls, including two analogue Circle Pads. This combination removes the traditional barriers between games, players and the TV by creating a second window into the video game world.

Storage:
The console will have internal flash memory, as well as the option to expand its memory using either an SD memory card or an external USB hard disk drive.

Other:
Four USB 2.0 connector slots are included. The new console is backward compatible with Wii games and Wii accessories.

Note: Details are subject to change.