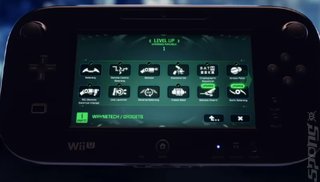 All Images (7) »
We all knew it was coming, but it certainly looks like Warner Bros and Rocksteady's Wii U port of Batman: Arkham City will be no rush job. A new Armored Edition was unveiled at Nintendo's E3 press conference just now, with Wii U GamePad features enhancing the experience.

A map of the city will be displayed on the Wii U tablet, as expected, but using touch commands the player can interact with Batman's gadgets in a number of different ways. For instance, chucked Batarangs will now be directed by moving the GamePad around - taking advantage of gyro sensors.

Explosive gel will also be enhanced using the touch pad, allowing players to plant gel on all kinds of surfaces and use the GamePad as a detonator. Other uses include direct access to Batman's range of weapons.
Companies: Nintendo Warner Brothers