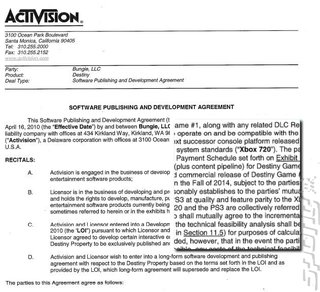 The Zampella and West case between EA and Activision (catch up with that in this article) meant that Activision had to make public a lot of documents, including the contract signed between it and Bungie. It contains some fascinating reading.

First up, it appears that even Bungie an Activision agree that 'Xbox 720' will do absolutely perfectly as the name for Microsoft's next-gen games console. The name sits nicely in the legalities of the contract. But there is more.

"The first Destiny game will initially only be available on Microsoft's Xbox 360 consoles, as well as its potential successor, which the contract refers to as the Xbox 720. Later games would be made for Xbox consoles as well as Sony Corp.'s expected successor to the PlayStation 3, and on personal computers."

Full contract can be read as a PDF here.