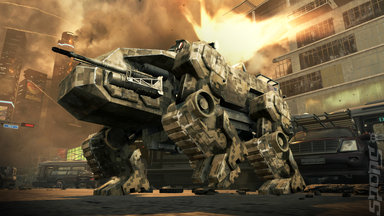 All Images (9) »
Call of Duty Black Ops 2 is out on November 13th 2012. It'll be huge. Well, the marketing and hype for it will be huge. The game itself will either be satisfactory, awesome, or a complete let down - you may even have made your mind up about that already. If not, here are some more details:

There are Drone planes with chainguns and rockets.

There are weaponised quadrotors.

According to CVG, which appears to be Activision/Blizzard's marketing partner at this stage in the game, "future tech is on show by way of glasses that display all the info you'd normally associate with an FPS HUD. This technology extends to vehicles too: looking ahead during an early on-rails van ride through Downtown Los Angeles gives us ample time to make out speedometer and fuel gauge displays in the corners of the windshield. Above the freeway, computerised displays point commuter traffic in the right direction."

The baddie is called Raul Menendez and you get a back-history set in the 1980s. Some gameplay is set in this period, " The only 80's environment revealed so far is Afghanistan."

Alex Mason returns. As apparently does Frank Woods... and we also get a Mason called 'David Mason'.

There are zombies, there is a branching storyline (but seriously are you really interested in the single player?), there is a "fixed turret SAM section".... and there is multiplayer. As we're not part of the marketing plan, we'll report more as soon as we get to hands-on.

Meantime, enjoy the shots and the video.