TimeSplitters 4 - It Lives! Sort Of!

Game has been seen, not in the wild! 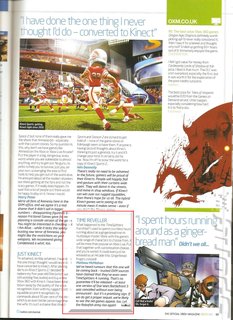 SPOnG reader, Shadzter, has alerted us via the power of Twitter to the fact that Crytek UK may have something to show and tell regarding the mythical Timesplitters 4!

As you can observe from the screenshot served up to us by Shadzter, OXM states that "trusted sources have claimed that they have seen (Timesplitters 4) running.

This, although not a locked on certainty of release nor any actual factual sign of the game running, leaves some hope.
Companies: Crytek
Games: Timesplitters: Future Perfect

fishsticks 26 Apr 2012 11:42
1/1
The rumours I've heard is that they've had a TS4 pretty much ready to roll for years now. It's just that because it doesn't feature a bald space marine and it's not a lame CoD clone, no publisher will touch it. They all say they want a FPS with something 'different', to make it 'stand out' but in reality they mean CoD but with a fancy gun type or some sort of rehashed feature the marketing department can label as 'quantum AI' or some such to stick on the box.
Posting of new comments is now locked for this page.