Grasshopper Manufacture and Kadokawa Games team up on new game 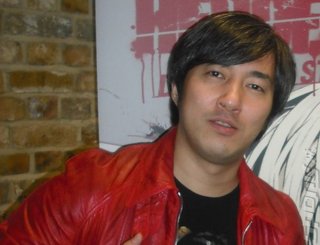 Goichi Suda (aka SUDA51) of Grasshopper Manufacture is teaming up with Kadokawa Games to produce the duo's follow-up to Lollipop Chainsaw with a game called Killer is Dead.

In an interview for Famitsu, SUDA points out that, "The game promises to retain the essence of Killer 7 and No More Heroes. It also promises to be a sort of Dark Side 007 in that it will feature a number of beautiful Bond Girl-like ladies."

According to Andriasang, "It's not a sequel to Killer 7, although it does promise to retain the essence of Suda's past 'Aassassin' games.

"The game's main character has a profession known as 'Executioner'. He goes around the world putting an end to S level criminals. The main character will visit a variety of places in order to fight his enemies. These enemies apparently have something to do with the Moon.

"Despite the mention of 'Moon' as a key word, the game is not science fiction. It's set in an extension of modern times."

It also points out that "Famitsu lists Yoshimi Yasuda as executive producer and Suda 51 as executive director. Suda is also in charge of the game's scenario."