PS4 gets confusing pix and rumours. We've got pix of 'design' images since removed... 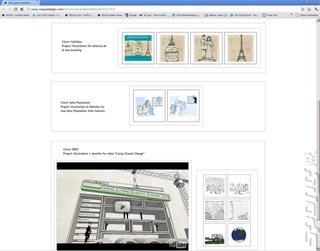 All Images (3) »
The seething requirement by the Internet's media pack for at least on new console reached boiling point this afternoon after Kotaku posted information regarding the "PlayStation Orbis" and a website to go with it.

Only the website, orbis.scedev.net itself has no images or information regarding the "new console". Another site (pictured) from a company called CoquesDesign did feature Orbis and PlayStation images (since removed). These, as you can see however, appear to indicate a new camera controller using a mobile phone in a similar way to Apple's 'Remote' application.

For its part, however, Kotaku apparently as a source with Orbis specifications, "Our main source supplied some basic specs," says the site. It then states that developers are already aware that the 'new console' will not be backwardly compatible, won't (as expected) have a Cell processor but will have, "AMD x64 CPU, AMD Southern Islands GPU"

"The PS4's GPU in particular, we're told, will be capable of displaying Orbis games at a resolution of up to 4096x2160, which is far in excess of the needs of most current HDTV sets. It'll also be capable of playing 3D games in 1080p (the PS3 could only safely manage 3D at 720p)."

More of that over here.

Thanks to this Neogaf thread for the CoquesDesign hints.
Companies: SCEI Sony