Rumours mount of Ubisoft and Last Story stock problems too 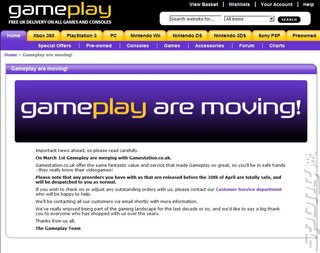 "On March 1st Gameplay are merging with Gamestation.co.uk.

"Gamestation.co.uk offer the same fantastic value and service that made Gameplay so great, so you'll be in safe hands - they really know their videogames!

"Please note that any preorders you have with us that are released before the 30th of April are totally safe, and will be despatched to you as normal.

If you wish to check on or adjust any outstanding orders with us, please contact our Customer Service department who will be happy to help."

While it is being couched in terms of a 'merger', it does actually indicate a closure. This is compounded by an MCV report that states, "Meanwhile, GAME has also informed a further 35 stores that they will be closed. It is part of the store closures already announced by the firm. There are currently 610 GAME and GameStation High Street stores and this will be reduced to 550 outlets by Christmas 2013."

On top of this GAME has told consumers that it will not be stocking (or has not been supplied with) copies of The Last Story. This comes after news that it would not be carrying Ubisoft launch titles for the PlayStation Vita. The reason, "We can't stock absolutely everything. That's just not possible."

According to a contrary source at the company Ubisoft was demanding that GAME matched pricing for product that had been set by large supermarket chains.

Right now, given that rumour and speculation, claim and counter-claim are the order of the day, we can only hope for the best for coalface staff and GAME Group customers alike.
Companies: Game Gameplay.com

gingineer 23 Feb 2012 16:05
1/3
I think it is a shame to loose the presence of video game retailers on the high street. I hope Game doesn't close completely.

deleted 24 Feb 2012 20:56
3/3
They might as already be dead, the games specialist doesn't stock all games any more, just a selection, and well HMV, Tesco etc all do that how does game offer anything different any more?
Posting of new comments is now locked for this page.