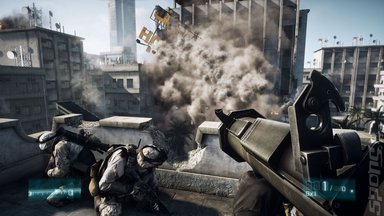 EA's Peter Moore has been sharing his views on the Battlefield 3 vs MW3 war that has been raging around us in the lead-up to the bigger War of FPS DLC. He thinks it's all good.

"I'm not sure that we didn't steal any share," says, "it's early days and we're only a month in ? we feel very good about it."

He can, of course, sell those benefits:

"Two entities have benefited from Call of Duty and Battlefield being on the market: gamers and the industry. "

In fact, he almost gets to the point of teaming up with Activision, "Together we've grown the genre enormously. 10 million sold in and 5 million sold through doesn't come out of nowhere...

Before making his point, "...if we haven't gained share, that means in the first week we've added 5 million new FPS gamers. "

So, what happens after the early days? "I think when the dust fully settles, maybe when we're looking at this at the end of our fiscal year (March 31, 2012) we'll do an analysis and I think we will have taken share.

I don't think there's any doubt about that, unless everything BF3 sells is just incremental. But I'm more focused on how we've done by our gamer and consumers, and yes many of them bought both games undoubtedly. Have our retail partners enjoyed this? Absolutely. And does this help push the game industry to the front pages of newspapers? You bet it does. Go look at USA Today, go look at The New York Times ? the big entertainment blockbusters this year are not movies, they're video games. Call of Duty and Battlefield have done that."

dave 10 Dec 2011 16:05
1/1
your right peter moore but you still killed the dreamcast so i cant trust a word you say.
Posting of new comments is now locked for this page.