"I own your arse now by riiiiights" 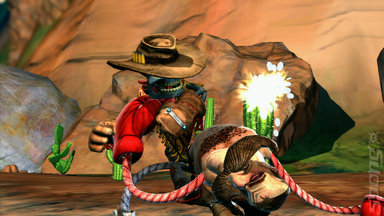 We Are Family, I've got all my puppets with me
Twisted Pixel, makers of The Maw and Splosion Man, has been bought up by the ever-hungry Microsoft Studios in a bid to "drive further innovation around Kinect and Xbox Live". The Texan studio's latest release, the Kinect-only The Gunstringer, has seemingly made them even more appealing.

Microsoft's Phil Spencer said "Twisted Pixel has an incredible track record of delivering innovative, critically acclaimed and most importantly, fun, games". The studio's founder Michael Wilford added "It is really exciting for us to solidify our long-standing relationship with Microsoft Studios, who we consider to be the leader in digital distribution and creating new innovations in gaming like Xbox Live and Kinect."

There's been no mention of how much money has been invested into Twisted Pixel but it's good to see a studio that has some positive news as opposed to hearing about yet more closures. The Microsoft Studios family already includes quality producers like Lionhead and Rare, so the folks at TP are in fine company. Wonder what they'll be putting out next?
Companies: Microsoft Game Studios Twisted Pixel Games
Games: The Gunstringer