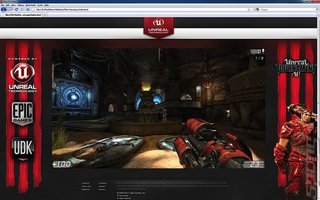 Man, we could make the greatest Farmville game ever with this.
Remember a little while ago when Adobe announced the new amped-up version of Flash that'd be capable of running intensive games? All the press releases in the world can make promises but until we see what it can do it's little more than hot air. Now, though, we have something pretty sweet: Unreal Engine 3 running in Flash.

A live demo of Unreal Tournament 3 was shown off by Epic's Tim Sweeney at the Adobe MAX 2011 Conference. While Flash has previously been known for rather simplistic affairs the latest version, Flash 11, provides the environment for console quality titles. "With UE3 and Flash, games built for high-end consoles can now run on the Web or as Facebook apps, reaching an enormous user base,? said Sweeney.

This is a huge techological leap forward. With Unreal Engine 3 serving as the backbone for a wide range of games, seeing them run via Flash is incredibly impressive. Adobe are calling Flash 11 "the console of the web" and with a company like Epic coming on board you can see why this is an exciting development. It'll certainly make Facebook games a damn sight more interesting...