Virtual and physical worlds combine to make something different 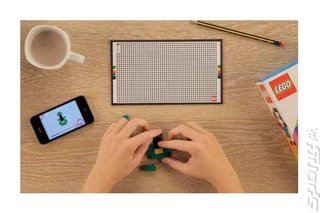 Just don't tread on any of it
There's been a fair few Lego games released in recent years but none have been like their brand new effort Life of George. Rather than guide a minifig through a bunch of levels, this one requires a bit more dexterity. Oh, and something that runs iOS.

It's a simple conceit. George needs you to help him build things from his life but you only have a limited amount of time to do so. Coming with a box of 144 proper bricks, he'll show you an object to create, put on the included map and take a picture of using the free app. The quicker you build it the more points you get. There's also a two player version of the game built in.

It sounds a bit dull when you read that, but have a look at the video. If you're not excited you have a heart of cold, dull stone.

See?! Good! Apparently it's aimed at kids aged fourteen and over but we reckon this could work with much younger players too – as long as you trust them with your shiny iPhone, of course. Life of George is released on October 1st in the US for a shade under $30. As soon as we know of a UK release, we'll update you.

Competition for Activision's Spyro Skylanders? What do you think?