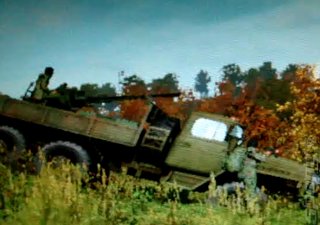 The CEO of military simulation developer Bohemia Interactive has told SPOnG that British broadcaster ITV has been "misleading" in using footage from ArmA II in place of an IRA terrorist film from 1988.

Last night's Exposure programme on ITV1 included a short film of Provisional IRA troops gunning down a British helicopter to illustrate Gadaffi's influence within the group. The clip was described as "IRA film 1988" - but on closer inspection it is in fact footage lifted from someone's gameplay experience on ArmA II.

Marek Spanel, the CEO of the game's developer Bohemia, said that the studio was not aware of the use of footage and that it was not approached by ITV for permission to use video from the game. "It is very weird to see our game used this way, especially considering the journalists were simply unable to tell difference between reality and game footage and described a short film clearly made using our game Arma II with what they call real IRA footage from 1988.

"Our games offer great level of freedom to our users to create all kind of things but in this particular case, it is very misleading," Spanel added. "At the moment we are gathering further information about the matter but I already had chance to see the documentary and so far I am not sure how could they make such obvious mistake.

"On a somewhat more positive note, we consider this as a bizarre appreciation of the level of realism incorporated into our games."

Update: It appears ITV was willing to speak to the BBC about the mishap, telling technology correspondent Rory Cellan-Jones that the clip inclusion was down to "unfortunate result of human error."
Companies: Bohemia ITV
Games: ArmA II

irritant 28 Sep 2011 09:55
2/4
Yeah, according to the BBC News article, ITV said: "The events featured in Exposure: Gaddafi and the IRA were genuine but it would appear that during the editing process the correct clip of the 1988 incident was not selected and other footage was mistakenly included in the film by producers. This was an unfortunate case of human error for which we apologise."

Is that so, ITV? Is that so? OK then, show us the "real" footage that you intended to use. The voice over played during the video game footage was pretty specific to what was happening in that clip so I'd quite like to see if that "real" footage actually exists.

BBC LOlz 28 Sep 2011 10:10
3/4
irritant wrote:
Is that so, ITV? Is that so? OK then, show us the "real" footage that you intended to use. The voice over played during the video game footage was pretty specific to what was happening in that clip so I'd quite like to see if that "real" footage actually exists.

Good point! SPOnG get on 'em!

zperk 28 Sep 2011 23:19
4/4
Looks like this was the real footage that they had intended to use, from the real 1988 attack: http://www.youtube.com/watch?v=nIgNj43S9sE&feature=related
Posting of new comments is now locked for this page.