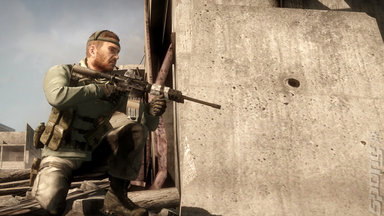 See you in court, buddy! *BANG*
As the date gets ever closer for his day in court against Activision/Blizzard, Vince Zampella is launching a bit of a charm offensive and promoting the bejesus out of his new baby. After being unceremoniously booted out of Call of Duty and Modern Warfare studio Infinity Ward, he and Jason West have come together to form their own brand new studio, Respawn. In an interview at the 3D Entertainment Summit in Los Angeles last week, he let spill a lot about what's gone on recently.

From covering what's happening at Respawn itself (not much at the moment that they can talk about, but it's coming) to the new deal it's struck with EA Partners (complete with a sly little dig at Activision), it's an interesting discussion. Sure, they couldn't really cover the bitter split thanks to legal limitations, but there's a lot more in there.

The early days of producing blockbuster games are covered too, as are the studio's plans for the future. What with it being a summit focusing on 3D entertainment, Zampella does mention that Respawn is "keeping a close eye on what is developing and where it makes sense", though "it's not something that's a focus for us." The studio is also looking at social gaming ? perhaps the imminent arrival of Call of Duty Elite has piqued his interest?

Further looking to the future, Zampella addressed the free-to-play model. "The free-to-play stuff is there to stay obviously. Where does that breach the triple-A games? I think right now there is a separation between triple-A games and what you think you are getting out of a game that is free to play and one that you pay $60 for. At some point that separation may not be there. So we have to keep a close eye on where that is and where it is going."

The full interview is available here. Now, what could Respawn be up to? Your thoughts are welcome...