Riccitiello On Kotick: We Got His Goat 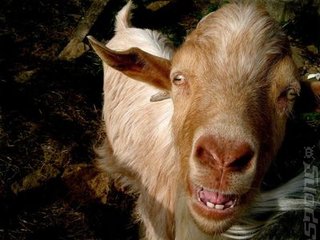 A goat refused to comment on rumour and speculation.
Tell you what, let's sell us some games by a bit of name calling and a quick game of 'dare'. At least this appears to be the thread beginning to string out between EA CEO John Riccitiello in terms of his relationship with Activision Blizzard CEO Robert - Bobby - Kotick.

It appears that EA's Battlefield 3 has rumpled feathers over at Activision. At least it has if the EA head has any say in the matter.

Mr Riccitiello has told Reuters that, ?It?s the beginning of the war (between Modern Warfare and Battlefield) and (Kotick) recognizes they?re going to be threatened. We?re going to have a clash of the titans this fall.

"The very fact that he?s trying to cast doubt on our game is a perfect example of how we got his goat.

This derives from Mr Kotick stating that, "Battlefield I?ve only seen on a PC and nobody?s seen it on a console yet. Most of our consumers play games on a console. Until I see it on a console, I wouldn?t be objective on commenting on it."