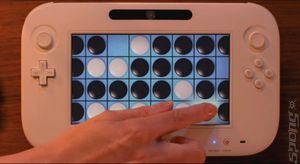 President of Nintendo of America has had to 'fess' up to using misleading footage of games such as Ghost Recon: Future Soldier to illustrate the HD capabilities of what he insisted on calling the 'new controller': the Wii U.

During a post-press conference in which, Reggie tellingly points out to host, Geoff Keighley, "You didn't pay me, like Hulk Hogan, to come here and break news..." he broke the news.

Asked about footage of Darksiders II and Ghost Recon: Future Soldier, "That was footage from Xbox 360 and PS3 versions of those cases, right?" Reggie admitted:

"Absolutely," before trying to clarify, "Because we're talking a year away from when this system's going to launch."

Almost makes you yearn for good, honest show displays such as Kinect's Milo and Kate.

Source: Gametrailers at about 4minutes and 36 seconds.
Companies: Nintendo

John C 8 Jun 2011 16:34
1/2
All that matters is the hands-on Zelda demo that other sites, like IGN, have posted. It's clear that the Wii U is able to produce graphics on par, at least, with the PS3 and XBOX 360. To use their footage, when it's almost ridiculously obvious that the developers don't have kits to produce Wii U footage, seems logical. Once again, the media are attempting to stir up some controversy to spur page views.