At least that's what the maths suggests. 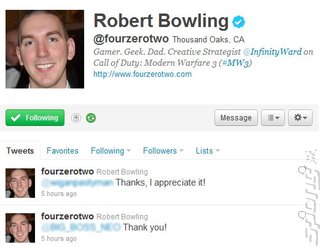 Infinity Ward's head of talking to people about stuff (aka "Creative Strategist @InfinityWard on Call of Duty: Modern Warfare 3", aka Robert Bowling) has pointed out on Twitter that, "Don't believe any rumor. All real #MW3 features and news will come directly from me. If I don't say it, don't believe it."

On the 21st of September 2009, Mr B' pointed out to Videogamer when asked if MW3 was in development, that, "No. Honestly we have no clue what our next game is. I'm planning on taking a nap for three months. And then maybe I'll wake up."

So, let's take him at his word and say that IW made its mind up when Mr Bowling awoke late in December 2009 and decided, "Yeah, we'll make MW3!"

Get the Xmas holidays over with and say that development started in late January 2010. The game is going to release in November 2011. Let's give it two months from final code, through marketing and sign offs from Microsoft and Sony. So, that would mean development stops in August 2011.

That would mean that from start to finish, according to the one source of news and features for MW3, the game will have taken Infinity Ward 20 months to make.

That's great going considering that, according to Mr Bowling, "We don't have lead platforms, we develop each version alongside each other. Xbox 360 is running at same as PS3."

Our coverage of MW3 kicks off at 1pm today chaps.