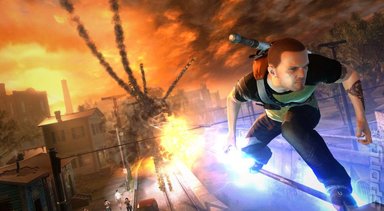 inFAMOUS. inFAMOUS. That's all we've been thinking about here at the SPOnG Underwater Castle, and now we get to learn exactly when we'll be playing as Cole McGrath once more. SCEE has just announced that inFAMOUS 2 will be landing in the UK , Germany and Ireland on the 10th June. Other EU countries will get it on the 8th June.

In addition to the bog standard regular edition, SCEE is releasing a lenticular Special Edition which will contain extra digital content in the form of the Electrocution Grenade, Golden Amp and a Cole McGrath inFAMOUS 1 skin. But it's the Hero Edition that collectors will want to look out for.

For an unspecified sum of your no-doubt dwindling money, you can grab the game, a replica Cole McGrath messenger bag, a Cole McGrath figurine, graphic novel, digital soundtrack and a Lightning Hook downloadable power and Kessler skin.

'Cosmic Blue' and 'Crimson Red' DualShock 3 controller bundles are also being sold at launch, along with a 320GB PS3 console bundle with the game. That's one heavy promotion - seems like Sony's very much willing everyone to forget about the recent PlayStation Network business, eh?

Watch the rather delectable inFAMOUS 2 opening cinematic below.