At long last, additional hardware for steaming games.... but not watching TV 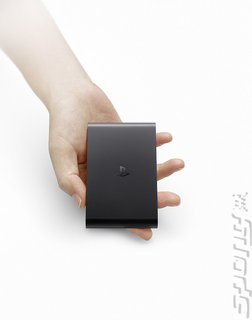 All Images (2) »
Remember PlayTV? That was the hardware add-on to let you watch and record telly on the PS3. You probably don't have on. Not many people did. Well, now you can get a new box called PlayStation TV for your PS4 but it's not a TV... at all, it's for game streaming.

It's a box that lets you stream games to you TV from your PS4 in fact. Sony believes that it "makes the ideal companion to PS4, enhancing the user experience and connectivity of the console and providing a second gaming station for an attractive price." Well of course it does. So, how much and when?

PS TV will be available this year in Europe and across the PAL region for ?99 (RRP). So what does that mean in the UK? According to T3, "Sony has confirmed to T3 that the UK price of the PlayStation TV micro-console will be Ł84.99 when it is released here in the autumn." That will also include a DualShock 3, although the PS4's Dualshock 4 is also compatible.

According to Sony, "The main features of the PS TV system are as follows:

?PlayStation 4 remote play: As with PS Vita, PS TV supports PS4 remote play and Wireless Controller (DUALSHOCK 3 or DUALSHOCK 4). This will allow PS4 owners in the living room to continue playing a game on a PS TV system in their bedroom. You can also enjoy most of your PS4 games on PS TV as if you were playing it on your PS4 system.

Bear in mind the caveats...

? Games requiring PlayStation Camera are not compatible.
? Since PS Vita is equipped with special features not supported on DUALSHOCK 3 or DUALSHOCK 4, such as touch screen, rear touch pad, motion sensors, camera, electronic compass and microphones, not all PS Vita games are playable on PS TV. Supported titles differ by country and regions.