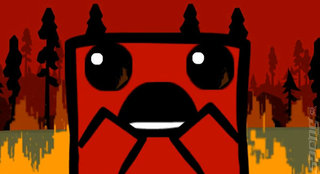 Well, we can imagine that Team Meat probably didn't send Microsoft any love letters over the Valentines' period - duo Tommy Refenes and Edmund McMillen have expressed their disappointment in the company's promotion (or apparent lack of it) of the XBLA version of Super Meat Boy.

Speaking at the Game Developers Conference in San Francisco, Refenes detailed the events that transpired as its hit indie game was due to headline Microsoft's Game Feast XBLA promotion last October. And according to him, Super Meat Boy got shafted.

Not only did its release week get shared with Double Fine's Costume Quest at the eleventh hour, but no apparent promotion for the game was present on the Xbox Dashboard until halfway through the day. "We were just like 'what the f***? Everyone else gets a free week except for us?'," Refenes recalled.

Despite being told that Super Meat Boy would sit at the top of the Dashboard's Spotlight section, Refenes notes that when promotion did arrive, "We just kind of got pushed to the side, and that's basically how the Xbox Live launch went. The only reason the game sold well was because of how we promoted it. The help from Microsoft was there in a very limited capacity.

"It's not supposed to hurt your feelings because it's business, but it totally f**king hurt my feelings." The co-CEO added that Microsoft had offered more marketing support if the game sold well, but those promises were never kept.

Despite the bitterness, McMillen came forward to add that the team had fun working with the creative side of Microsoft. "Everybody that we could talk to were great; the people who we couldn't talk to were the problem. So everyone who we worked with was wonderful. Everyone who was making decisions, not so much."

ohms 1 Mar 2011 14:51
1/1
Apple did the very same thing to a small dev I know. Promised a spot in the featured section, then dumped because EA had a similar title coming out a few weeks later.
Posting of new comments is now locked for this page.