But is also obviously saddened. 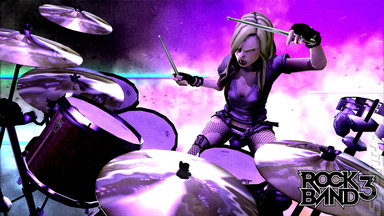 Rock Band developer Harmonix have shed a tear for the Guitar Hero series it created, after news that Activision is to can the music rhythm series for good.

On the company's forums, community manager John Drake said, "We were sad to hear yesterday that Activision was discontinuing development on Guitar Hero. Our thoughts are with those who are losing their jobs, and we wish them the best of luck."

Harmonix has been made well aware of the slowing sales of retail copies of Guitar Hero and Rock Band, and so is taking its evolution digital with 2,500 songs to play and a relaunch of the Rock Band Network.

"The discontinuation of Guitar Hero is discouraging news for fans of the band game genre," he adds. In the same virtual breath, he bigs up the future of Rock Band and happily welcomes all customers over to Harmonix's side of the fence.

"For rhythm gamers out there who haven?t yet given Rock Band a chance, Rock Band 3 software is compatible with a wide range of instruments, including most Guitar Hero controllers. Looking to the future, for fans that want to switch, we?d happily welcome you over into the world of Rock Band."