The Darkness II - Now with Added Hype and Bias 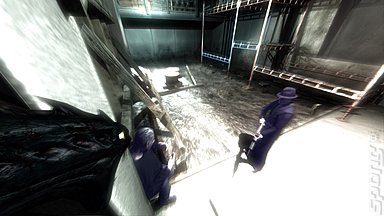 2k Games has announced the sequel to the sort of okay really The Darkness, with the easy to remember, The Darkness II for PS3, Xbox 360 and PC.

Developed by Digital Extremes and based on the supernatural horror comic book series created by Top Cow Productions, you get to play 'Jackie Estacado, wielder of The Darkness ? an ancient and ruthless force of chaos and destruction."

The blurb seeks out a unique point of difference and BAM! here we go, "The Darkness II breaks out of the sea of conventional first-person shooters with its fervid Quad-Wielding gameplay, which will allow players to slash, grab, and throw objects and enemies with their Demon Arms while simultaneously firing two weapons."

And it gets better becauuuuusssssse.... "The Darkness II will feature award-winning comic book writer, Paul Jenkins, who will provide a tightly integrated narrative that weaves dark humor with hardcore tenderness."

Hardcore tenderness!! How drunk were they when they wrote that?

It gets even better - and yes, apparently you - the gamer - are an idiot as Marc Silvestri, founder and CEO of Top Cow Productions and co-creator of The Darkness comics states, "Yeah, call me biased, but this second installment of Jackie Estacado?s epic saga is ? in my humble opinion ? one of the most brutally cool games I?ve ever played. 2K Games hammered this one out of the park.?

Marc, you're biased. Calm down.

No firm date or price for release. More info it on TDII site.

Captainpugwash 8 Feb 2011 21:06
1/1
It's a good job that Digital Extremes cleared up what The Darkness II is all about, since I thought that the game was going to be a glam rock FPS + RPG where your character would destroy his enemies with a high pitched voice and his battle guitar.
Posting of new comments is now locked for this page.