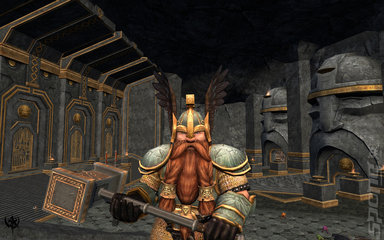 This dwarf is sad that he has to move house.
Mythic is closing down several of its servers for Warhammer Online: Age of Reckoning. How do you spin this into something that sounds like good news? By making your users feel like they're 'upgrading' their service with a "free server transfer," of course!

From the 9th February, Mythic will be allowing North American players to hop from the Iron Rock and Volkmar servers to Gorfang at no extra charge. For German players, you get the opportunity to move from Carroburg to Drakenwald.

Of course, don't waste your time because new accounts will be banned from registering on either Iron Rock, Volkmar or Carroburg during this time, and after a three week period they will be set to 'retired' and you'll be forced to move anyway. If you want to move to a server that's not Gorfang or Drakenwald, you'll have to pay.

"The game play experience of our customers is something we highly value. We don?t make changes like this lightly. A lot of metrics and analysis accompanies this type of decision," reads a statement at the very bottom of the game's website. "We feel that these changes will help to ensure that server options continue to facilitate that best RvR experience out there. Thanks for playing and see you on the battlefield!"

That comment sounds very apologetic, after the page's opening gambit that makes it sound like its users have won Tonight's Star Prize:

"As part of our ongoing efforts to maintain an active, competitive, and engaging experience in WAR we have decided to open free transfers for players to specific servers. WAR, more than many games, only gets better with more people. These transfers will enable players to experience more action during all hours whether fighting in scenarios or Open RvR."