Netflix and Hulu Plus coming with hand-waving support. 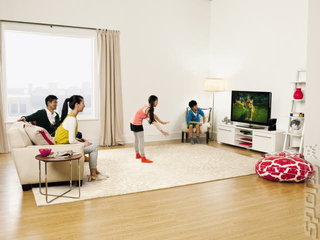 Microsoft announced at its CES 2011 presentation last night that in its first 60 days on sale Kinect sold 8 million units worldwide.That could, of course, mean 'shipped' though.

When you consider that previous numbers pegged sales of the peripheral at 1m in ten days and 2.5m in three weeks, that means Microsoft managed to shift over 5m units over the Christmas period. Pretty impressive considering that the company was originally expecting 3m units by end of 2010 (which was later revised upward to 5m).

Bloomberg reported that the 8m figure merely referred to hardware shipped rather than sold - Microsoft confirmed this on Twitter but noted that it had "no channel inventory - every Kinect we make we sell." Whichever way you slice it, the device has outperformed expectations.

To celebrate the milestone, Microsoft took the time to reveal some new Xbox 360 projects coming that will take further advantage of Kinect. The biggest of these was an application called Avatar Kinect, which is being pegged as a kind of motion-based Avatar version of PlayStation Home. Netflix and Hulu Plus were also confirmed as arriving with Kinect support later this year.
Companies: Microsoft