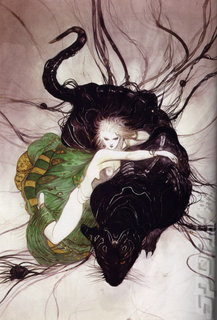 Long-serving artist on the Final Fantasy series of games, Yoshitaka Amano, has been linked with a new website that has emerged that is tied with a new project.

The project, named "Deva Zan", lists the famed artist of key art and character designs from various instalments in the RPG series as supervisor on the work in progress.

Amano is due to hold a press conference on December 21st (next Tuesday)via live streaming on the wesbite where he will provide further details on Deva Zan. You can check the website out for Deva Zan here.

Any thoughts on What Amano's mysterious current project is? Any thoughts, feel free to post them in the Comments section below.