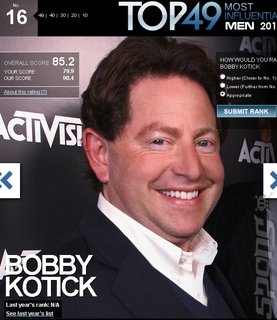 Activision/Blizzard CEO Robert 'Bobby' Kotick has, according to men's mag Askmen, been called "The Hitler of the games industry" by "more than one talking head."

The online magazine included this claim - made about the Jewish head of Activision - in its rundown what it sees as the World's Most Influential Men. In the rundown, Kotick comes in 16th place.

The text reads in part, "He has also infuriated legions of gamers by suggesting a strong desire to raise prices and charge for cutscenes. It's radical ideas like these that have led more than one talking head to call him 'the Hitler of the Gaming Industry.'

"Kotick’s critics can complain until they’re blue in the face because as long as he retains control of franchises like Guitar Hero, Call of Duty and Tony Hawk, he’ll continue to be one of the richest and most influential men on the planet. And that’s something he intends to take to the bank... and to the Guinness Book of World Records. Call of Duty: Modern Warfare 2 went down in history as the most successful entertainment launch of all time, with first-day sales of over $401.6 million internationally."

Firstly, we've no idea what the mag thinks a "Talking Head" is. Secondly, none are actually quoted. Thirdly, Bobby Kotick is a businessman, not the leader of a hideous pack of political gangsters who want to destroy entire groups of people. Get some perspective.

Article is here with thanks to MCV for the heads-up.