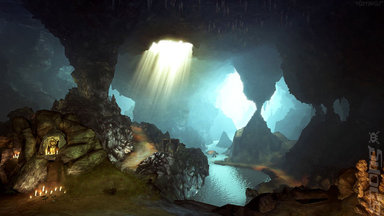 Tacked onto the end of the info from Microsoft regarding the phone app is the following:

"Mobile phone roll out will begin from October 4th

"- Android and Nokia Symbian will launch on October 4th

"- Apple iPhone will roll out from the 6th October"

"- Windows Phone 7 will be released following the launch of the mobile device in Europe."

We're then told, "Available in the UK, France, Germany, Spain, Italy, Netherlands and Sweden - Fable III: Kingmaker will be available on Windows Phone 7: the only phone that lets you play games with Xbox LIVE - when it?s released across Europe this holiday."

Speaking at Eurogamer Expo today, however, Peter Molyneux apparently thinks you can get the app now.

The blurb states, "Whether you?re a Rebel looking to fight for the people of Albion against the tyranny of your wayward King, or a loyal Royal follower, then sign up to take part on www.Fable3Kingmaker.com and get started. Players can take ownership of land for their faction using Fable III: Kingmaker mobile application staking a claim to unclaimed or opposing team?s territory by tagging their location and planting a virtual flag using the GPS facility on their smart phone.

"The faction with the greatest number of flags in any given territory at any given time will ?conquer? that land ? changing it in colour and following to either the Rebels or the Royals. Players will be rewarded for their allegiance and efforts in capturing territory with in-game ?Gold? which may be transferred into the full game of ?Fable III? on Xbox 360* when it launches across Europe on 29th October.

"The ?Gold? can be spent on player customisation and in-game products, from crystal swords to manor houses, giving fans of Fable III the chance to build up their bank account and get a head start on their friends before the game even hits the shelves later this month. And for those already plotting their road to rule, there will be the opportunity to claim chests full of additional in-game ?Gold? from designated locations scattered across the map."
Companies: Lionhead
People: Peter Molyneux
Games: Fable III

or I could get an iPad + Windows 7 Phone and hack install android on the iPad!!