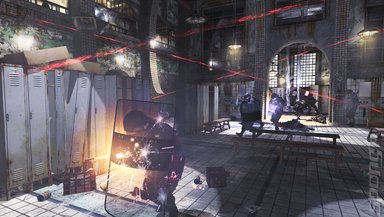 When speaking with the audience at the panel Zampella had this to say on the matter:

"I've seen reviews where people have written things about the game that are untrue - like that feature doesn't exist, so they obviously didn't play through the entire game,"

Also on the panel was Bethesda's Todd Howard who added that:

"If I'm going to play Modern Warfare multiplayer, I know that I'm in for 50 hours, so they do a lot of research, so when the research is a review where some guy didn't spend a lot of time playing your game, that's crushing.

"But if they're going to give you criticism and they've obviously played the game and thought about it, which we all get, it's actually helpful."

Finally, co-fcounder of Respawn, Jason West, had this to add on the subject:

"The way Rotten Tomatoes works for movies I think is a lot more accurate reflection of positive or negative, versus 92, versus 91.3, and they all get averaged out and it's pretty random."

All interesting comments for sure but does Mr. Zampella think that the gaming press have more than 24 hours a day to play every game they review to completion? Can a games player not get a good grasp of whether a game is enjoyable or not within 10-12 hours? Tell us how long you think a game should be allowed to convince you whether it's worth your time in the comments below.

Matthew O'Donnell 16 Aug 2010 10:49
1/7
Interestingly i am producing a review website based completely on such princicbles making it highly unique and indepth. Obviously stupid to put specifics here as spong will be a competitior :P

tyrion 16 Aug 2010 12:20
2/7
I always try to complete a game before I write a review (not that I've had a chance to do much reviewing recently), but I've usually made my mind up about it after the first 2-4 hours. I very rarely change my mind after that time.

Let's face it, if a game hasn't "grabbed" you by then, it's probably not going to and the general gaming public has no need to keep playing a game if it's not grabbing them, they'll just trade it in for another one, probably by someone else.

It's not just about reviews and review scores, it's just as much the fault of the developer not taking into consideration what people are going to think of the game when they play it from start to finish. Why put good parts of the game at the start and not at the end? If the second part is interesting, but the first part isn't, cut out the first part - simple! If I make something amazing that I want people to experience, that last thing I want to do is hide it amongst crap, I want to show it to people in the best possible circumstances so that they appreciate it fully.

It's a valid point and deserves to be reflected int he review score, because these games are played by real humans. It's unrealistic to assume I'm going to play the whole game through no matter what. I've bought it for pleasure, not to play it then judge it as a critic.

Reviewers should play a game however they want, and judge it accordingly. There's no such thing as an objective review, so play it and judge it as a normal human.

Matthew O'Donnell 16 Aug 2010 12:25
4/7
True as i set myself the rule of 'I will play anything once' Usualy up to an hour. Sometimes tho i have found some games to be extremely badly paced at the start yet are stunning examples of pure gameplay. For example Kingdom Hearts 2. The first few hours are pure jobs and turorials but the moment you are introduced into the main plot i could not put it down. There are many more such examples. To me a bad game is something that offers everything it can at the start with no pacing throughout the rest of the experience.

I could go on indepth but its hard to explain in short sentences. My spelling does not help either :(

Tim Smith 16 Aug 2010 14:04
5/7
Matthew O'Donnell wrote:
Interestingly i am producing a review website based completely on such princicbles making it highly unique and indepth. Obviously stupid to put specifics here as spong will be a competitior :P

You're going to have a challenge on your hands reviewing something like WoW or GT 5 then :-)

In my mind, the point of a review is to provide the reader with advice on whether or not to spend their hard earned cash. Admittedly a number of reviewers appear to think that the reason for a review is for people to look on in awe at that reviewer's deathless prose. Each to their own... but I'd say that 10-12 hours of game-play is a good gauge. After all, reviews are reviews and not game-play guides.

From my POV with regard to informing the readers - as most game sales spike in the first week on sale, we run into a problem as a lot of publishers don't get review code to hand with enough playable time to finish a game before the critical time. There's really very little point putting a review of, for example, inFamous up months after it's major selling window has closed. By this I mean that it doesn't help the reader to make a purchase decision.

You'll also be aware that some publishers don't even get review code to reviewers before day of release. When this happens, it breeds distrust.

I take your point regarding games that are painful to get into the start off with but that turn out to be playable further in. There are a few. In fact, games should be able to engage the brain. However, if you can't get at least some pleasure out of 10 hours of game play, then I'd suggest that you're money is better spent on something that you will enjoy. Unless you're a masochist, in which case, each to their own again.

Back on the inFamous point, however; there is an argument in this age of sequels, to run a fresh review of the original in the run-up to the release of its offspring.

There's a strange muzzing of the lines - and a lack of confidence in game reviewers still - that leads people to believe that the same discipline is required to review a game as it is to review an album of music, a novel or a movie. It isn't.

Not only that but the same time overhead is not incurred. You can't review the latest novel on "Easy Mode" in the same way as you can't review the latest movie on 'Hardcore'. Is reviewing the latest movie, but not the director's cut less worthwhile? Do you have to review a restaurant or car by eating all the menu items every day? Or by driving the car in all weathers, with all seats full in all terrains? Of course not.

Also, do you review games in all modes? Collect all achievements and trophies? Play 2, 3, 4, 16, 256 players MP? Do you play as all playable characters? Unlike a book, an album or a movie which are closed environments, what exactly does 'play the full game' actually mean?

Game reviewing calls for a different skillset, time allocation and contextual knowledge. A more interesting debate for me is "How to review a game? Does Mario Galaxy call for the same overview as Alan Wake?"

Your idea for a site that reviews only games that have been played to the finish is laudable and I totally support it. (In fact, give me a yell and we can discuss review copies). Good luck with it, and I mean that in the English not-sarcastic sense.

Do you have to run through an entire 15 season career mode? Build your PRO player up to the highest grade? Nope, since an experienced reviewer will have played enough FIFA to know what the crack is.

I know many resturaunt reviewers who base their review on one visit and one meal. They don't get s**t because they didn't eat there on a busy night or try all the cuts of meat. Instead, they publish a taster of what to expect because at at the end of the day it's up to us to make up our own mind. If a reviewer spent 8hrs playing GTA4 then that's long enough for them to get a good feeling of how good the game is and its good and bad points. Sure, they might not get to experience the final concluding missions but if a game of that size all hinges on the final 20% of the game then it's a pretty weak game in my books.

deleted 16 Aug 2010 17:51
7/7
each to his own I suppose I could never review something like street fighter as i am so bad at it I get pissed off after 10 mins and don't play, my review would reflect that.

But give me Batman:AA which I 100% (save for that secret room!!) in around 15 hours because i enjoyed it so much then my review would be reflected by that.

so really any review is opinion simply opinion and any review that tries to tell me what to do is wrong, it should simply guide me let me taste the experience and help me decide if that's the way I want to go, personally I don't see a need for a review that has completed the game.
Posting of new comments is now locked for this page.