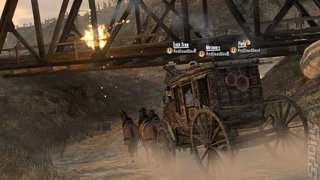 All Images (10) »
Rockstar Games, a publishing label of Take-Two Interactive Software, Inc. (NASDAQ: TTWO), is proud to announce plans for an ongoing series of downloadable content for the highly acclaimed open world game, Red Dead Redemption. Four packs of add-on downloadable content will be released for the PlayStation Network for the PlayStation 3 computer entertainment system and the Xbox LIVE online entertainment network* over the next few months, starting with the Legends and Killers Pack at the beginning of August 2010, and culminating with the Red Dead Redemption ?Undead Nightmare? Pack this fall. The packs follow the recent release of the free Outlaws To The End Co-Op Mission Pack, which is currently available on PlayStation Network and Xbox LIVE.