The GTA Online "I'm Not a Hipster" Update Is Now Available

Express your incredible individualism and stand out from the herd with The post ironic, artisanal, organic, entirely independent, 100% re-claimed “I’m Not a Hipster” Update now available for Grand Theft Auto Online. 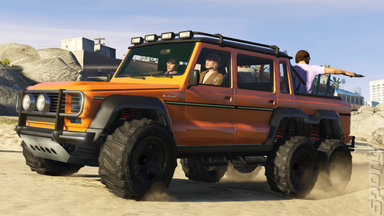 Choose from seven new vehicles including classic nostalgia rides like the Glendale, Warrener, Blade and Rhapsody – affordable cars that seem casual on the surface, but have hidden potential to be unleashed with a few modifications. The environmentally conscious set can check out the Panto microcar, while those looking to roll with their Crew in more ostentatious style can add the massive 3-axel, 6-seater Dubsta (unlocks at Rank 100) to their fleet.

A tuned up Rhapsody and Warrener hit the streets.
Even Ammu-Nation is getting in on the latest non-ironic trends with the Vintage Pistol and Antique Cavalry Dagger now in stock. Make sure to try all these out in the slew of new Jobs, as part of your long arduous journey to become one of Los Santos' effortlessly cool.

Along with today's update, gear up for 12 new Jobs across an assortment of game modes, including Races that provide showcase opportunities for these new retro rides, a Deathmatch in Puerta Del Sol, two new Captures and more. There are also three new Gang Attacks in Chumash, East Vinewood and Mirror Park.

Parachuting Airwaves (Rank 15, 1-8 Players)
Students of style know that what comes up must go down. Drop 4,370 feet while imagining you're over all the bands you listen to on Radio Mirror Park, as you twist and turn sharply down to the pond below.

Race Beach Odyssey (Rank 15, 1-16 Players)
Nothing says artistic credibility like a grainy image of trash next to a burnt out RV, so get your butt off a nice beach, and go to a nasty one. This is a Point to Point Race for Sports Classics starting in Chumash, ending in Sandy Shore, mainly on-road with opportunities to hit top speed.

Race Before It Was Cool (Rank 15, 1-8 Players)
Any skinny jeans wearer will tell you, sometimes things just don't fit. Try and squeeze up to eight compact cars around the tight corners of this lap Race in Mirror Park.

Race Caffeine Rush (Rank 1, 1-8 Players)
If your friends caught you drinking anything except a flat white at an independent coffee house it would be social suicide, but when you need java, you need java. This is a Point to Point Sedan Race from Del Perro to Mirror Park passing by four 'Cool Beans' coffee shops.

Capture Contend: Condo-monium (Rank 1, 2-8 Players)
Make a statement about late capitalism or income equality or art or pointless statements or something by trashing condos in Puerto Del Sol. This is a Contend style Capture going for the last of the party supplies in the courtyard between two identical apartment blocks.

Last Team StandingEast Vinewood LTS (Rank 9, 2-16 Players)
They don't know how it started, maybe two girls got the same tattoo, or reposted a Snapmatic without giving photo credit. What they do know is sides have been chosen and East Vinewood's gone to hell in this two team Last Team Standing.

Race Embracing America (Rank 1, 1-8 Players)
All your friends are going East in search of the last un-gentrified patch of turf in the country, and you're heading West. Load up a so-uncool-it's-cool Sedan, and race toward Little Seoul. Lots of straights and a few tight turns at the end of this point to point track.

Capture GTA: Grab a Cab (Rank 1, 2-8 Players)
After twelve hours 'rolling' at your local post-industrial techno-house night, your tattooed friends will be too wide-eyed to drive themselves. Pick up some taxis for them in this two team GTA-style Capture based around the Downtown Cab Co depot in East Vinewood.

Race Hip to be Cool (Rank 1, 1-8 Players)
Because driving around Rockford Hills in nice cars is too mainstream, and going through Vespucci Beach in low riders is kinda yesterday... This Compact class Race takes you back and forth over the Los Santos Freeway and in and out of the Casino parking lot.

Survival Legion Square Survival (Rank 25, 1-4 Players)
Freedom of speech is dead as the cops crack down on Legion Square protesters. Battle the police on foot, in SUVs, and eventually in Buzzard helicopters. And remember that the real bad guys are the bankers looking down on the action from their office windows.

Team Deathmatch Puerta Del Sol (Rank 1, 2-8 Players)
Every artist wanted to die young, then they wanted to mock their predecessors with an ironic statement about dying young, now it's a post-ironic statement and they might end up actually dying.

The brand new Dubsta unlocks at Rank 100 and can accommodate up to 6 players, perfect for rolling out in force with Crew members.

There are also tons of tweaks and updates made to Grand Theft Auto Online as part of this update. A few notable ones include:

• Ten existing GTAV vehicles have been added to the southernsanandreassuperautos.com website for purchase, including Story Mode characters’ vehicles:
• Albany Primo
• BF Surfer
• Bravado Buffalo
• Franklin's Bravado Buffalo S
• Bravado Youga
• Cheval Picador
• Dundreary Regina
• Trevor's Karin Rebel (clean version)
• Trevor's Nagasaki Hot Rod Blazer
• Michael's Obey Tailgater
• Pure Gold and Brushed Gold paint colors have been added to LS Customs in the ‘Metals’ category. These unlock at Rank 100.
• A new Pure Black window tint has been added to LS Customs, along with four new jazzy vehicle horns (including one which loops and speeds up / slows down as you drive).
• Eight new individual player celebrations and four new paired Celebration animations have been added.
• Players will no longer be charged Insurance costs if their vehicle is destroyed by another player who does not have enough GTA$ to pay.
• Fixed an issue where, if an insured Personal Vehicle was destroyed, both parties had to pay the insurance costs.
• Fixed an issue where some four-wheel drive vehicles had reverted to two-wheel drive.
• Players are now able to bookmark Jobs whilst in a Playlist from the Pause menu.
• Tear Gas now does more damage and lasts longer.
• A small tick has been added to the first screen in the corona if a player has played a Job before, much like in the pause menu or Next Job Voting Screen.
• The level of difficulty is now displayed when pressing D-pad down when playing Missions.

This update also includes a host of other adjustments, game tuning and exploit fixes. For the complete list, please visit the Rockstar Support site. To download the "I'm Not a Hipster" Update, just boot up your online-connected PS3 or Xbox 360 and start GTAV. You'll be prompted to download the automatic update (1.14) and Xbox 360 players will also be required to download an additional compatibility pack upon entering GTA Online.

Stay tuned for details on future GTA Online content updates in the weeks to come - as well as info on the upcoming "I'm Not a Hipster" Event Weekend with lots of special additional bonuses and contests happening this Friday through Sunday.
Companies: Rockstar
Games: Grand Theft Auto V