Konami Digital Entertainment has today elaborated on the many new additions gracing its eagerly-awaited PES 2011 title. 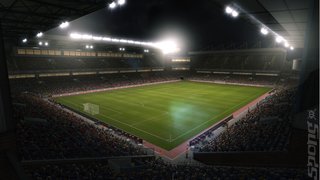 All Images (9) »
Due for release in the Autumn, PES 2011 has been astounding football fans with its free-flowing, unfettered gameplay. Total control is the new game's mantra, and PES 2001 delivers this with an all-new power gauge system wherein players govern the strength and position of every pass. Total 360-degree control adds a layer of realism to the series, and Konami has showcased this innovation with an all-new trailer.

The new footage shows the total freedom of passing PES 2011 offers, alongside closer looks at its new dribbling, defensive hold-up play, and jostling. Similarly, the trailer gives an insight into the new power gauge, while also showing how feints and tricks can be mapped on to the R3 button and accessed with ease. PES 2011 utilises over 1000 new animations, and these are also on show as the new game demonstrates its key attributes in the footage.

Konami has also released a number of new screens to accompany the trailer, and these reveal for the first time the new 'Stadium Edit' mode, that allows users to create their own home ground for use in the game, and the first screens for the massively reworked Become a Legend mode, where players are cast as an upcoming starlet and strive to earn major honours and become the world's greatest player. More information will be released in the coming months.
Companies: Konami
Games: Pro Evolution Soccer 2011