Tony Hawk’s Pro Skater 2 on N64. Whatever Next? 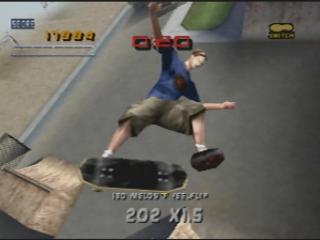 All Images (4) »
The N64 version of Tony Hawk’s Pro Skater 2 has snuck onto the shelves in the USA. Yes, the Nintendo 64! What with all the excitement building around future consoles, Nintendo’s GameCube in particular, publisher Activision and developer Edge of Reality are not going to let us forget the much-loved 64. And what a way to reinvigorate the old console, with one of the most successful games of the past year. Good sense, say we.

Not one to tamper with a winning formula, the N64 version features all the improvements and enhancements from its Pro Skater 2 siblings. Players can show off their skills in international skate parks including Marseilles, New York, Philadelphia and Skate Street in Ventura. Each park is packed with ramps, rails, fun boxes and other objects that allow the player to trick off of just about everything in sight.

Adding to the game’s replayability, the 3D skate park editor allows players to build their own dream parks from scratch. Players can see, in real-time, exactly how the park will look, and can even test ride the park in various stages of development. Gamers can also canvas their own personality onto the virtual landscape with the new create-a-skater feature. This tool allows them to choose such characteristics as weight, height, dress, board type, tricks and skating skills.

Tony Hawk’s Pro Skater 2 is still enormously popular in the UK, selling consistently across several platforms. The release of the N64 version in the UK is not confirmed, but surely must be under consideration. A nation of N64-owning skaters awaits.