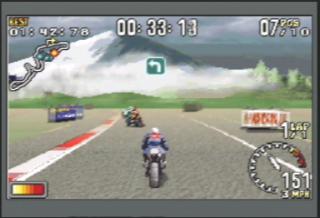 All Images (19) »
THQ has released the first shots of its version of Moto GP for Game Boy Advance.

The game originally debuted in impressive form in the arcades, boasting four life-sized bikes, each equipped with plasma screens for good measure. From these humble beginnings, (ahem) Moto GP made its way onto PlayStation 2 where it became one of the best selling games in Japan.

The game looks really impressive, joining the ever-growing list of outstanding racers available for the Game Boy Advance. Running in Mode 7, a pseudo 3D technique pioneered for the SNES, the conversion captures the feeling of speed and balanced competitiveness of the PlayStation 2 game, all in the palm of your hand.

Coming equipped with seventeen tracks from the Moto GP series and true-to-life motorbike manufacturers, the game will appeal to fans of the series, as well as fans of the game who in turn will be rewarded with a bespoke AI engine and weather and lighting effects.

Moto GP for Game Boy Advance will be available from August throughout Europe, which is a whole pleasing month before it sees the light of day in Japan or America.
Companies: THQ Visual Impact
Games: MotoGP: Ultimate Racing Technology