No, he certainly didn't say or mean worldwide sales. 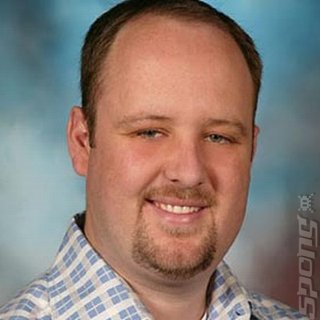 And after all this, he's still smiling. Bless him.
Microsoft director of product management Aaron Greenberg has been forced to clarify recent comments made in an Edge Magazine interview, after an error on CVG apparently led readers to believe he was commenting on a worldwide install base.

In an amended story, CVG reports on Greenberg's statement that the Xbox 360 has "nearly double" the install base of the PlayStation 3 thanks to a lack of a Blu-ray drive. However, the original story said the executive spoke of worldwide figures, rather than North American numbers.

"Microsoft's Aaron Greenberg has claimed that Xbox 360 has "nearly twice" PS3's worldwide installed base - partly because its lack of a Blu-Ray drive allows it to be sold at a more attractive price point."

The quote is still visible in the comments to the amended story.

This led to a Twitter comment from follower 'Phleg' who asked, "Can you clarify the apparent 'We're at twice the PS3 install base worldwide' quote from CVG? Using real numbers vs shipped?"

Greenberg answered; "Look at the quote, I never said worldwide, I said nearly twice the installed base according to NPD data - 20M [Xbox 360 units sold versus] 12M [PS3 units sold]."

Still, we're glad that mess is over with, otherwise we'd have thought Greenberg was either bonkers or had trouble counting. Now we know he doesn't have trouble counting.
Companies: Microsoft
People: Aaron Greenberg

Or maybe he is an idiot who works for Microsoft...

Tone 16 Mar 2010 21:03
7/10
and the console war roles on....
look people, you have to realise there are good and bad points to both consoles and its just a matter of preference. Me i like the 360 (however mine's broke :P) for its user interface and XBL, however the ps3 front is best with its hard ware capabilities but its interface is just not that great in my opinion. if only they would design a system built like the ps3 and programmed like the 360 . For now teh pc is king !!!
PS before you start ripping into me, first i have both consoles and pc and these opinions are entirely my own. You are entitled to have your own view just as i am.
Secondly i believe pc is king because you can add mods to games that make it last longer or add a different perspective which is wwhy i like it loads.

bollo 23 Mar 2010 10:57
9/10
It does make me chuckle how Microsoft conveniently ignore worldwide sales. The PS3 outsold the 360 worldwide last year and is doing so again this year and is only 5m behind in worldwide sales despite the 360 having a year head start and being cheaper. This doesn't look good for the 360 therefore Greenburg ignores it and keeps banging on about Blu-Ray as if its a bad thing lol

The reason the 360 is cheaper is because its badly made and has a ridiculously low spec, missing things like WiFi & rechargeable controllers which a PS3 owner takes for granted.