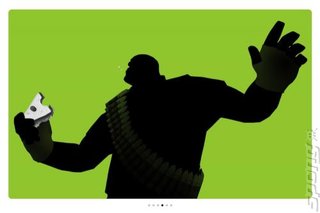 All Images (6) »
You have to hand it to Valve and its classy handling of pre-announcement hints. Following news of Mac OS X-specific images and menu files being discovered in a new Beta of Steam, the company has sent several teaser images to various websites - all with the message "in anticipation of an upcoming announcement from Valve".

The six images are all send-ups of iconic Apple advertisements, featuring characters from Left 4 Dead, Half-Life and Team Fortress 2. MacRumours was sent an image of Gordon Freeman in a white suit, with the Apple logo on his chest. MacNN then discovered a message from Valve, containing a Portal/TF2 remix of the "I'm A Mac" adverts.

A Team Fortress 2 reference featuring the Heavy imitating an iPod advert hit Shacknews, while Eurogamer received an "I Hate Different" image. Rock, Paper, Shotgun got a faux magazine clipping titled "Introducing Steam. [Games for?] the rest of us" and finally Macworld was sent a re-enactment of Apple's classic 1984 TV advert, starring Alyx Vance of Half-Life 2.

If the upcoming announcement from Valve is anything other than Steam for the Mac, you could probably consider this the most epic troll in the history of computer games. Slightly surpassing ET: The Extra Terrestrial, in fact. More information is likely to be revealed at GDC 2010 next week. Can you wait until then, Mac fans?
Companies: Valve
Games: Half-Life Half-Life 2 Left 4 Dead Team Fortress 2