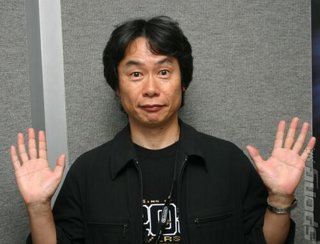 You Gonna Get Honoured!
The British Academy of Film and Television Arts - or BAFTA - is to present its prestigious Fellowship award to creative genius Shigeru Miyamoto, the Nintendo game designer who has created some of gaming's most memorable characters.

The Fellowship is "the highest accolade the Academy can bestow on an individual for their creative work," says chairman David Parfitt, adding that the Academy is "honored to have Miyamoto with us to accept his award."

It's not a title that is handed out lightly. Previous Fellowship luminaries include Alfred Hitchcock and Stanley Kubrick - the award covers all fields of media, not just video games. But Miyamoto has done enough to earn the Fellowship, we reckon. On top of creating industry-changing games such as Super Mario Bros and Donkey Kong, one of his Legend of Zelda titles is commonly regarded as the Greatest Game Ever Made™. That's 1999's Ocarina of Time, obviously.

"I am very grateful to be able to receive such an honorable award from the British Academy," Miyamoto said. "Our video games cannot be created by one person; since Donkey Kong until the most recent New Super Mario Bros. Wii, I have been working closely with a number of friends for three decades in order to develop fun and enjoyable games.

"I would like to receive this honorable award on behalf of all of these dependable colleagues."

What a nice chap. The BAFTA Awards are to take place on the 19th March.
Companies: BAFTA
People: Shigeru Miyamoto
Games: Legend of Zelda, The: Ocarina of Time Super Mario Brothers