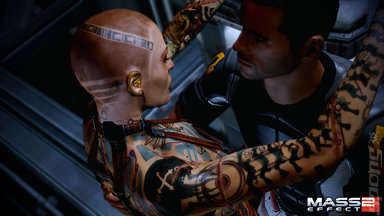 "Can't Touch This"
It's a battle of the 'core' and 'casual' this week in the Chart Track UK software chart, as Ubisoft's Just Dance remains wedged between Mass Effect 2 and Call of Duty: Modern Warfare 2 in second place, with only 850 sales away from reclaiming the #1 spot.

(Last week's position in brackets, followed by current position, game name, publisher and number of weeks in the chart)

BioWare's sci-fi adventure suffered a sales drop of 64% this week, which almost put it on sales parity with the Wii dancing game (-26%). Modern Warfare 2 (-12%) is also challenged of its third place by newcomer Dante's Inferno, which Chart Track says is only ?a tiny number? of sales away from pushing the Christmas #1 under.

EA's virtual take on Inferno is the only new entry to hit the Top 10, with Star Trek Online just sitting outside at #11, and MX vs ATV Reflex debuting at 18th. The Sims 3: Design & High Tech Stuff add-on pack reaches 20th in the chart.