Attempts were made on Mario Bros 3 and Super Mario World. 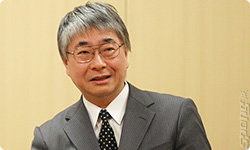 Toshihiko Nakago
New Super Mario Bros. Wii may be getting a lot of praise for its amazingly fun four-player simultaneous multiplayer feature, but did you know that the process took Nintendo over two decades?

That?s the revelation coming out of Nintendo this week, with two of Shigeru Miyamoto?s close collaborators under the spotlight in Nintendo?s ?[CEO Satoru] Iwata Asks? article. Toshihiko Nakago, currently president of SRD Co., spoke of finally implementing a multiplayer mode in a Super Mario Bros. game.

?If we count forward from Mario 3, you could say that it's taken us over two decades to make [Mario multiplayer] a reality,? Nakago explains, after failed attempts on the NES classic, Super Mario World on the SNES and most recently, New Super Mario Bros. on Nintendo DS.

The team of Nakago, Miyamoto and Takashi Tezuka (General Manager of Software Development in Nintendo?s EAD) attempted to manipulate the SNES? Mode-7 technology to implement a multiplayer, but ultimately that was replaced with Yoshi.

?Another fifteen years went by and the Nintendo DS came out. So we thought: "This is it!" We now had two screens and we began to do tests in order to create a multiplayer mode, which would allow players to appear together on the same level,? Nakago explains.

?[But] as the levels became incredibly complex, we couldn't have done it even if we'd wanted to. So then we created a special level where you could go head to head with Mario versus Luigi. When we tried that, we could see that having a multiplayer mode was indeed a lot of fun.