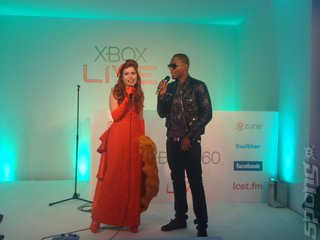 All Images (23) »
Paloma Faith and Taio Cruz helped launch Microsoft's Xbox Social Networking initiative last night as consoles were available to try out Twitter, Facebook, Last.fm and the new Zune movie store ahead of its implementation this morning.

The current darlings of the pop world were introduced by a TV presenter chap called Jeff, apparently, who told jokes about using Twitter with James Corden. After performing Faith's Stone Cold Sober and Cruz's Break Your Heart, the two then performed a rendition of Dream A Little Dream Of Me together while attendees soaked up the booze.

Xbox 360 units were lined up with Arcade games installed along with the new social networking services. They all work pretty well within the confines of the Dashboard, as you'll be able to tell from today, with Twitter being the only application using a completely different interface.

From what we know already, it appears that you can't have any of these services running in the background while you play ? likely something Microsoft will look into, as that would be incredibly useful for people wanting to take advantage of this. Toying around with the applications, I initially thought that it would be a bit silly logging into Facebook from a computer, but I ended up having great fun showing other people around me the photos I had uploaded from trips to Japan, Scotland and... Essex, and was the focal point of many conversations. I can see this being quite fun in a similar party atmosphere.

The Zune marketplace was a bit of an oddity, as the only thing that really seems to have changed is the brand name, and the fact that there were far fewer movies on the service than there used to be on the 'classic' Video Marketplace. But maybe that was because the service hadn't been properly rolled out yet. I ended up spending some of Microsoft's own Points to try out streaming a video ? that video ended up being SpaceJam. I am truly very sorry, Microsoft.

Ending with many rounds of Street Fighter II (at which I performed poorly), the night was a good showcase of social applications that aim to enhance the Xbox experience. Fitting that they had a social gathering to demonstrate social things, right?

Check out the photos we've uploaded of Taio Cruz and Paloma Faith's faces.

Sony is launching its PS3-integrated Facebook app in the next firmware update (3.10). This is expected to hit late this week. More details here.
Companies: Microsoft