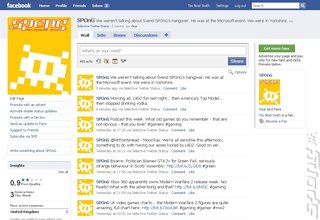 After much speculation, some rumour and much not commenting on either, Sony has confirmed that the PS3's next update - 3.10 - will indeed contain an integrated Facebook app.

The update will enable the "the PS3 to automatically update your Facebook News Feed with Trophy and PlayStation Store activity." It also "enables developers to set specific criteria in their titles to publish additional game information to your News Feed. You can then check out your updates, and those of your friends, on Facebook, Twitter, and other social media favorites through the PS3?s built-in web browser."

"- The Photo category on the XMB has been revamped to make it easier to see more of your photos stored on the PS3.
"- The PSN Friends List has been modified based on feedback we received after update 3.00. Additionally, you can now choose a color for your PSN ID on the XMB."

Nooo! We're joking about that last one. Check out the preview below: